“Way back in 2015, I was commissioned to write a story for a forthcoming comic book format sci-fi website. Alas, the website never came to fruition, and I was left with an orphaned story, a story with no home, a story no one would get to read.

I thoroughly enjoyed creating Mechanical Mike and could not allow it to languish, unloved and unread, in the dusty archives of my computer. So, I took Mechanical Mike from the files, dusted him down, and carefully re-wrote the story.

The result is this Novelette, available as an eBook, or a Paperback Pocketbook.

This is a fun story, a modern pulp fictional tale of a ‘gum-shoe’ style detective, a beautiful blond ‘bombshell’ of a girl, a mad scientist, robots, and evil Nazis, all in occupied France during WW2.

What some readers say…

I can imagine Paul White had a load of fun writing Mechanical Mike. It’s a bit like sci-fi in drag… well a mix between that and a thriller.

Add in loads of World War 2 action, the Nazis with a devious plan to win the war – that’s enough from me – you need to read it.

Author Paul White has blended the history of war films, Nazis, World War 2, and Pulp fiction. It is an extremely fast-paced story that skillfully mixes a wide range of genres, including Romance, War, and Thrillers.

The title, the book cover, the colours and design, along with the language used, is very well balanced, making it a great all-rounder.

Pardon me for not sharing the story here, I believe it would diminish the effort of the writer to entertainingly mesmerize his audience… that’s gotta be you too.

I would love to see this book made into a movie.

What a great fun read. It is exactly what you glean from the cover… and more.

I mean, what other read has robots, a mad scientist, Nazi soldiers, a beautiful girl, and lots of action in Paris, France, during WWII?

This is a true must-read for those who want to be excitedly entertained.

Deep Waters is the latest Electric Eclectic book, and the first new release of 2021.

For Deep Waters, Paul White has taken a totally different approach from his last offering, the superb, gritty and surprising crime drama, ‘A New Summer Garden‘.

With Deep Waters, we follow the main character, Gary, as he struggles to come to terms with the death of his beloved wife.

After a failed suicide attempt, Gary take himself off to an isolated island, far away from the distractions of daily life and the people he knows, as kind and as helpful as they try to be.

This touching and emotional tale allows privileged insight into Gary’s mind as he stumbles onward through life and unveils an understanding of why he chose this island to execute his last wishes.

Deep Waters in available in both eBook format, and as an Electric Eclectic Pocketbook Paperback

“…My first thought, rather obviously, was to name the boat Francis, after my deceased wife, bless her soul.

But then, I felt it was not the right thing to do. Francis had never been here, never been to the island. Neither of us knew this place existed before, before… now, which was part of the reason I came here. To get away from those haunting memories, as callous as it may seem.

You see, that is what life is all about, the memories. The memories of shared experience. The things you do with family, mum, dad, siblings. The adventures with friends and, of course, all the things you do, all the places you go, all the battles you fight and all the little victories you celebrate with your lover, your soulmate, the one you wish to grow old with.

Francis was my soulmate. It was the memories we shared from the life we were building together which haunted me now.

Don’t get me wrong. I did not want to forget. I do not want to erase them from my mind, but neither did I want to be reminded of every detail each time I walked into a room or got onto the boat.

So, no. I could not call the boat Francis…”

For all other orders (eBook only) https://books2read.com/Deep-Waters

The huge raindrops were constant, drumming a never-ending tattoo onto the roof of the car and crashing into the windscreen like a million kamikaze diamonds which splintered into slivers of distorted white light as they hit the glass.

The intensity of the rain limited my visibility, even with the wipers on full speed I found myself squinting into the darkness of the night trying to decipher what was road, what was verge, and what was simply reflection.

I must be insane.

As my eyes grew tired and my brain became weary, every shadow became menacing, each refraction of light an ominous threat. I drove with a sense of foreboding, a sense all would not end well.

That realisation was enough. I must to stop soon.

Besides, I needed fuel.

“Carl, Carl” she screamed down the phone. “You have to help me. You have to come now”.

I simply jumped into the car and started to drive. I never considered the weather, never checked the fuel gauge, I just drove.

Seven times so far I have called her back. No answer. Her phone just rings. I am concerned, worried.

I should not be.

I should not be going to her.

I should not be risking my life. Not for her. Not now. Not after what she has done.

Not after the way she treated me.

But here I am, in the centre of a storm, in the middle of nowhere.

I headed left, following the sign, it was not much more then a dirt track but I was going to stop at Pemberton. I was going to get fuel and a big mugful of strong, black coffee.

I would need a boost of caffeine before I saw her, before I faced whatever crisis she was having.

I drove slowly along the track, trying to avoid the potholes which were brimming with rainwater. I was having to battling the rough uneven surface of the track.

I was also battling with myself.

The Devil in me said forget her, to go home. She was a liar. She was nothing but trouble.

I had to agree.

She was all of those things, yet I still thought of her more days than I did not.

Maybe I was doing this more for myself than for her?

Maybe this had nothing to do with her at all?

Maybe I must to prove her wrong… or right.

Maybe I needed to do this to give me closure, to finally draw a line under our relationship, to free myself, so I could move on.

The dirt track levelled out and changed to a paved surface. I relaxed slightly. The rain easing, leaving a misty haze hanging in the air which surrounded everything with a wispy, ghostly quality.

My phone rang. It was her.

I pulled the car over and answered. “I’m on my way, the weather is terrible. How are you doing?”

She giggled. I could hear voices in the background. “I’m fine, I just needed… you know… some stuff… I’m fine now. I’ve friends here. You don’t need to come now. I don’t want you to come anymore. I don’t want you here at all.”

The laughter from several voices echoed down the phone.

So that was it. She was talking shit again, pumping god-only-knows-what into her veins. I should have known.

I believed her… until now.

“I’m halfway to you,” I said. I had no idea how far I had come, or how far away she was from here, from Pemberton, the facts were irrelevant just now.

“Then you are halfway home too,” she answered. I heard the other voices laughing at her remark.

“Yes, I am,” I replied through gritted teeth.

“Bye then,” she said with a flippant snigger in her voice. The phone went dead.

I had my answer.

I now felt I was free to move on.

But sometimes life gifts you in unexpected ways.

Today life gifted me a future.

You see, as I started to drive away, I saw a silhouette of a woman leaning against her car, which was stopped a little further along the road.

Not a place to be alone at this time of night, especially in such inclement weather.

I walked towards her, calling ahead as not to startle her. “Are you lost? Can I help?”

I have no idea why I said that because it was I who was lost… and in more ways than one. I also had no notion whatsoever of where I was, or in which direction I should go from here.

I drove her into the town, explaining I too was looking for fuel and a strong cup of coffee. She found that amusing.

Pemberton, it seems, has only one garage, which also doubles up as the town’s only diner, neither of which would be open until Monday. So, I had the rest of tonight and all of tomorrow to wait for both coffee and fuel.

She was telling me I would be stuck right here, in Pemberton, for the rest of the weekend.

As it turned out, that was just fine because her home was comfortable, her coffee rich and strong, her bed soft and her body warm and tender.

But sometimes life gifts us unexpectedly.

I hope you enjoyed this small snippet of my work.

Although this story does not appear in my book, ‘Within the Invisible Pentacle’, it is representative, in style, of the twenty-nine short, and not so short, stories which do.

You can find ‘Within the Invisible Pentacle’ on this link, https://mybook.to/wtipentacle 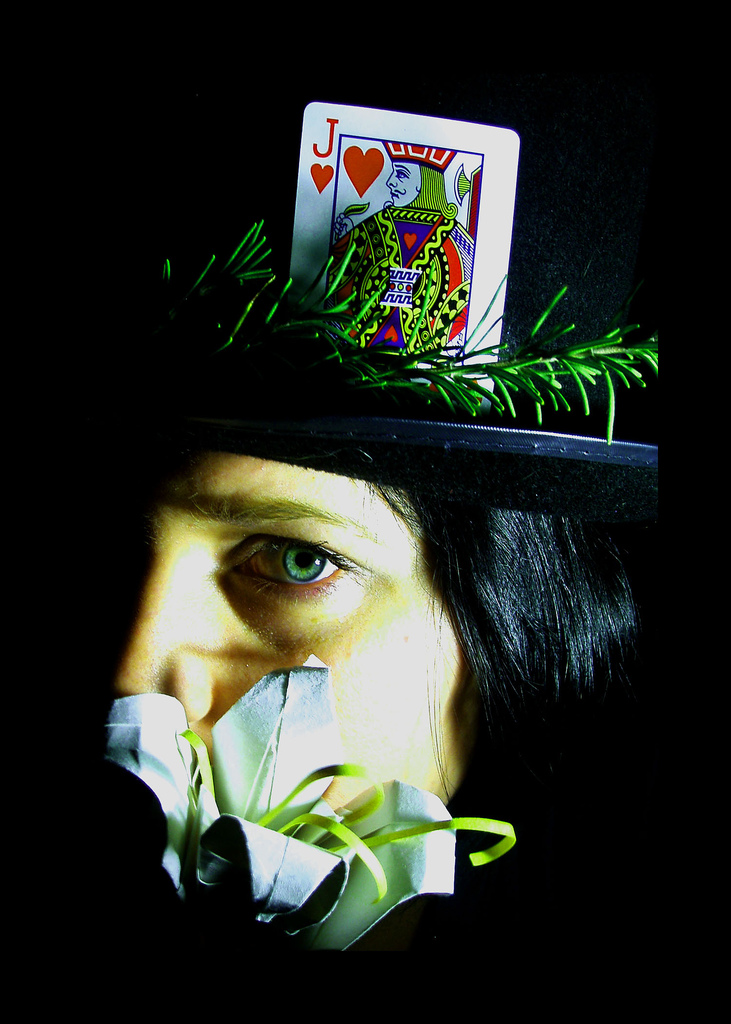 It depends on which cards land, ‘cos the devils in the deal,

The King and Queen of Hearts are what you wish to feel,

So, pick them up, fan them out, take a look and see,

There’s the Jack of Clubs, his grinning back with glee,

And sitting just behind him is the ace of spades, bad luck,

Like the hand life’s dealt you; they don’t give a flying fuck.

The King and Queen will only be in your nightly dreams

And the Heart you so desire is much father than it seems.

“I’ll raise you ten,” he says, with an evil sneer,

You want to tear his face off, rip it from ear to ear,

Because nothing can now fill what is an empty space.

And nothing will leave you just about level,

Until you sell your vacant soul to Beelzebub the Devil.

So get up from the table, again you walk away.

Tomorrow is Valentines, a day of true romance,

When lovers reveal their passions, hoping for a chance.

Where wine and chocolates and bouquets of red flowers bloom,

And a thousand pairs of feet scuttle off to some hotel bedroom.

Where the lost and lonely sit and weep, in darkened empty homes

And stare at the blank glass screens of their silent mobile phones.

And those who’ve lost wander the streets in a lonesome daze.

When love is some distant recall which is hard to find,

Where the fallen Jack of Hearts lays upon the floor

With one arm raised, finger-pointing, showing you the door. 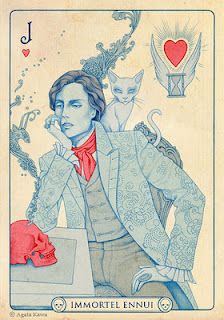 Hey, why not check out ‘Teardrops and White Doves’ a collection of my poetry. Available in a fully illustrated, full colour, Hardcover book direct from my printers, or as a standard Paperback from Amazon 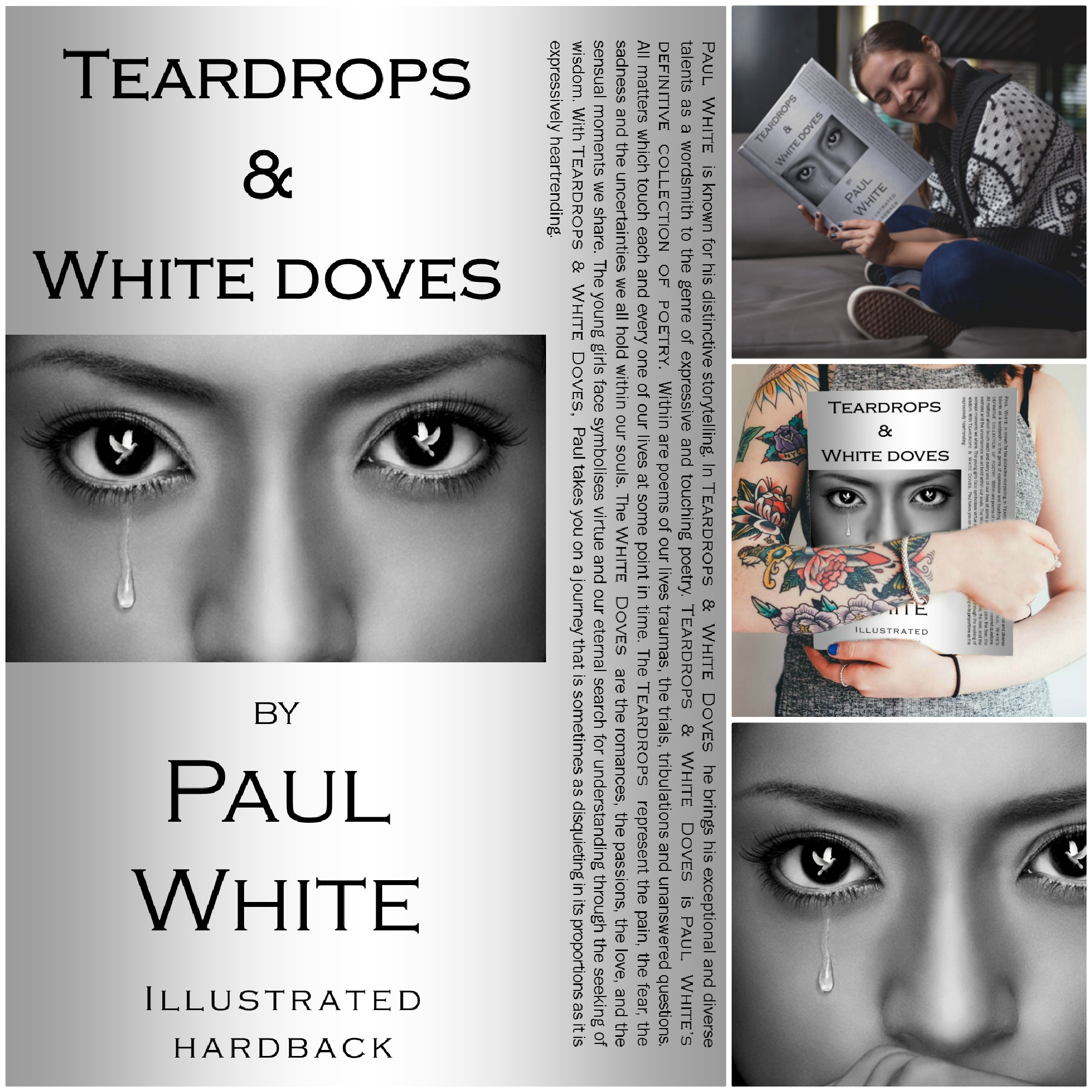 Have you read these yet?